At least two people died when a 6.2-magnitude earthquake rocked Indonesia's Sumatra island on Friday, with residents shuttling loved ones to safety as buildings crumbled around them.

The quake came just minutes after a less violent tremor as terrified residents had begun evacuating their houses.

"We all fled our home (after the first quake)," Yudi Prama Agustino, 36, told AFP. "I have a one-year-old baby, so in panic I pushed the stroller out of the house."

The quake hit the island's north at a depth of 12 kilometres (7.5 miles), about 70 kilometres from the town of Bukittinggi in West Sumatra province, according to the United States Geological Survey.

Agustino's hometown in Agam district is another 40 kilometres from Bukittinggi.

"I noticed there was an earthquake because my kids' toys fell over. I panicked because there were also my in-laws in the house and they are quite old and sick," Agustino said of the first tremor that was recorded at 5.0 by USGS.

"Once we were outside a much stronger 6.2 quake happened and everybody panicked," he added.

Two people died and 20 were injured in West Pasaman -- about 17 kilometres from the epicentre -- according to the head of the National Disaster Mitigation Agency (BNPB) Suharyanto, who like many Indonesians goes by one name.

Indonesia's meteorological agency BMKG warned people to stay away from slopes over fears of landslides at the peak of the rainy season.

The quake was felt in the neighbouring provinces of Riau and North Sumatra and as far away as Malaysia and Singapore. No tsunami warning has been issued. 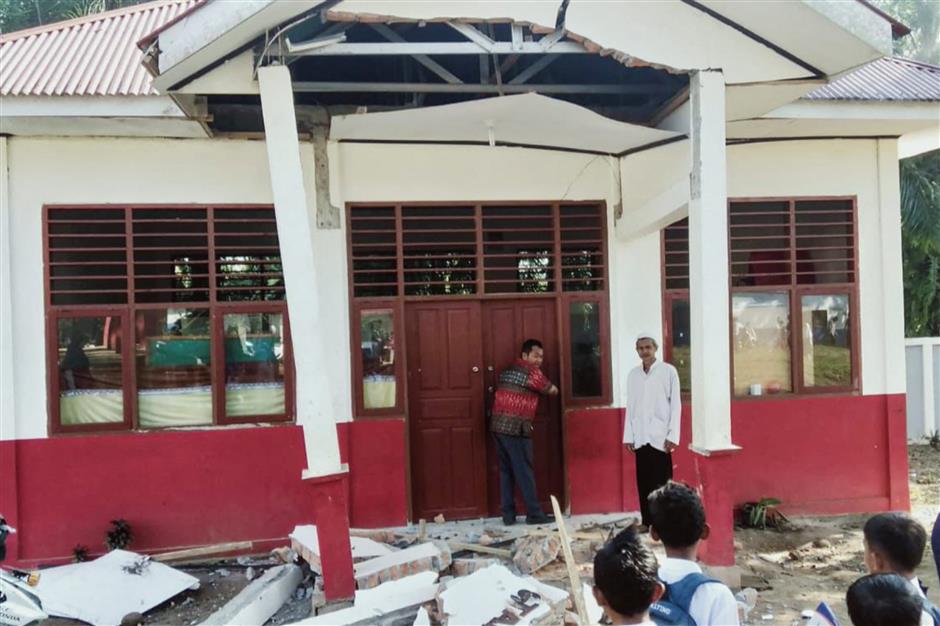 Residents inspect a building damaged by a magnitude 6.2 earthquake at Kajai village in West Pasaman on February 25, 2022.

Images shared with AFP from Pasaman city, near the quake's epicentre, showed partially collapsed houses with bricks lying on the ground and holes in the walls.

The town mayor's residence also suffered damage with glass shattered all over the floor, according to Suharyanto.

Television footage showed patients being wheeled out of a hospital in West Sumatra's provincial capital Padang.

"The mayor called and ordered all second and third floors in every building should be vacated," he said.

Irpanda, a resident of Pasaman city, told Metro TV that he felt both the first and second tremors.

"At first, the quake only lasted for a few seconds. People fled their homes and buildings nearby were swaying," he said.

"But then another quake happened and it was so strong. More people fled their houses," he said, adding patients at a local hospital were moved outside.

Tremors were also felt in Singapore, witnesses and police said.

"Earth tremors were... felt in certain parts of Singapore at about 9:45 am," the police said in a statement.

The police and emergency services "have received several calls from the public reporting these tremors", police added.

One Singapore resident told AFP he felt a slight shake at home which left him dizzy, while state broadcaster CNA showed a video of ceiling lamps swaying at a highrise apartment.

Malaysia's meteorological department said in a tweet that "vibrations" were felt on the peninsula's western states.

Indonesia sits on the Pacific "Ring of Fire", causing it to experience frequent earthquakes.

In 2004, a 9.1-magnitude quake struck the coast of Sumatra and triggered a tsunami that killed 220,000 people throughout the region, including about 170,000 in Indonesia. 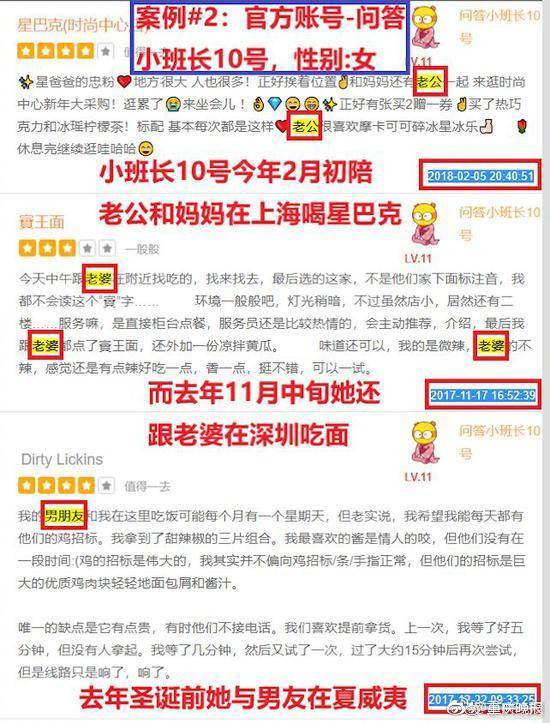 At least 31 drown as migrant boat sinks in English Channel****** 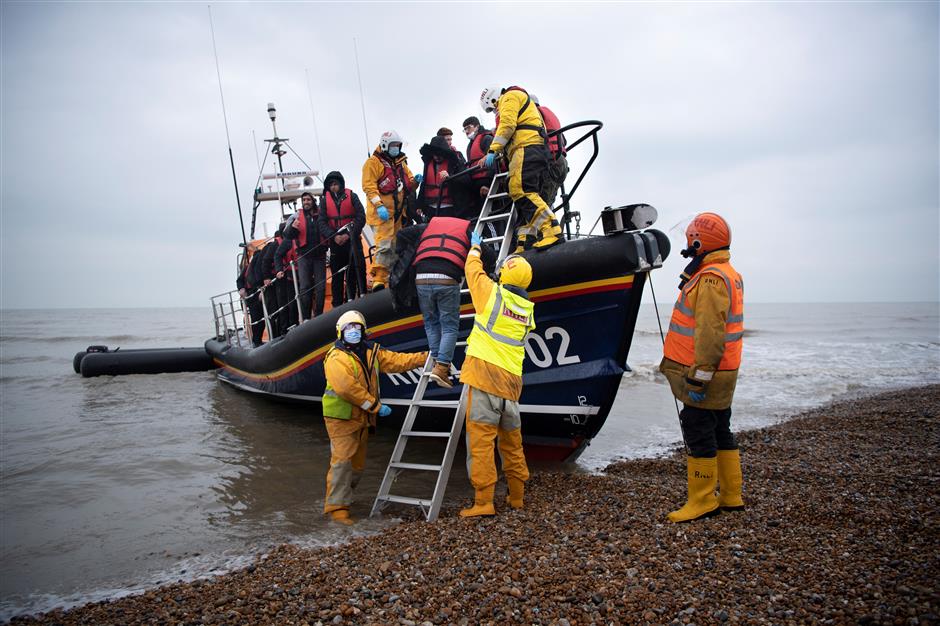 Migrants are helped ashore from a Royal National Lifeboat Institution lifeboat at Dungeness in southeast England on Wednesday. Dozens of others died in a separate sinking.。

At least 31 migrants bound for Britain died on Wednesday when their boat sank in the English Channel, in what France's interior minister called the biggest migration tragedy on the dangerous crossing to date.。

Interior Minister Gerald Darmanin said 34 people were believed to have been on the boat. Authorities found 31 bodies – including those of five women and a young girl – and two survivors, he said. One person appeared to still be missing. The nationalities of the travelers was not immediately known.。

The regional maritime authority, which oversees rescue operations, later said 27 bodies were found, two people survived and four others were missing and presumed drowned. The discrepancy in the numbers was not immediately explained.。

Ever-increasing numbers of people fleeing conflict or poverty in Afghanistan, Sudan, Iraq, Eritrea or elsewhere are risking the perilous journey in small, unseaworthy craft from France, hoping to win asylum or find better opportunities in Britain. The crossings have tripled this year from 2020, and another 106 migrants were rescued in French waters on Wednesday alone.。

A joint French-British search operation for survivors of the sinking was called off late on Wednesday. Both countries cooperate to stem migration across the Channel but also accuse each other of not doing enough – and the issue is often used by politicians on both sides pushing an anti-migration agenda.。

Four suspected traffickers were arrested on Wednesday on suspicion of being linked to the sunken boat, Darmanin told reporters in the French port city of Calais. He said two of the suspects later appeared in court.。

The regional prosecutor opened an investigation into aggravated manslaughter, organized illegal migration and other charges after the sinking.。

Lille Prosecutor Carole Etienne said officials were still working to identify the victims and determine their ages and nationalities, and that the investigation may involve multiple countries.。

"It's a day of great mourning for France, for Europe, for humanity to see these people die at sea," Darmanin said. He lashed out at "criminal traffickers" driving thousands to risk the crossing. Activists demonstrated outside the port of Calais on Wednesday night, accusing governments of not doing enough to respond to migrants' needs. Hundreds of people live in precarious conditions along the French coast, despite regular police patrols and evacuation operations.。

The bodies were brought to the Calais port, said Jean-Marc Puissesseau, head of the ports of Calais and Boulogne. "We were waiting for something like this to happen," he said, given the growing numbers of people risking the passage. Aid groups blamed European governments for increasingly hard-line migration policies.。

"The UK is not a choice, it is an escape, an escape for people fleeing the lack of welcome in Europe," said Nikolai Posner of French charity Utopia 56.。

Darmanin urged coordination with the UK, saying "the response must also come from Great Britain."

British Prime Minister Boris Johnson and French President Emmanuel Macron spoke after the sinking and agreed "that it is vital to keep all options on the table to stop these lethal crossings and break the business model of the criminal gangs behind them," Johnson's office said. Macron stressed "the shared responsibility" of France and the UK.。